Skulduggery Pleasant: Playing with Fire by Derek Landy. This is the second book in the Skulduggery Pleasant series about a supernatural detective and it was on my November Reading List last year, but I didn’t get to it and I plan to catch up this year. And man, am I looking forward to all the magic and British humor!

Assassination Classroom. Yes, a manga has made it onto my list. I’m crazy about the anime and I can’t wait to get my hands on the first volume of the manga by Yusei Matsui which should arrive next week. Pray that there are no problems at the post office… Again. The story is about an octopus-like creature… Nooooo! Don’t stop reading this post. I know that Japan has a nasty reputation about movies with tentacles, but trust me, this isn’t one of those nightmare-inducing cases. The story is about an octopus-like creature who is a teacher to a group of misfits, tasked with assassinating him before a certain date or he’ll blow up the Earth. I was rather skeptical about this anime (again, Japan and tentacles), but it’s one of the best I’ve watched. It didn’t have me scratching my head at the plot, kept the fan service to a minimum by Japanese standards and developed its characters, even those that were not the main ones. I strongly recommend you watch it. As for the manga: I plan to review that too so I’ll get back to you about it. 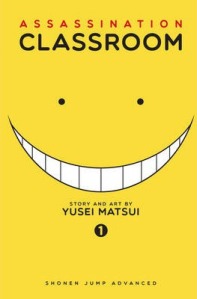 Coraline by Neil Gaiman. Since this comes from the author of one of my all-time favorite books – The Graveyard Book – I have very high expectations for it. And no, I haven’t watched the movie; I wanted to read the book first.

Dead Man – Book I of the Black Magic Outlaw series by Domino Finn. Never read anything by this author, I hadn’t even heard of them until a few days ago, but I just loved the blurb so once again: high expectations for this one. It’s about a modern-day necromancer who gets in trouble with the police and a bunch of supernatural beings. It’s currently FREE ON AMAZON so you can download it and then we can gush over how good the book is… Complete with a sexy dude on the cover.

The Summer Palace by C.S. Pacat. This one is actually a companion short story to the Captive Prince trilogy, the first book from which was in my 6 Books I Read & Fell in Love with in 2016 post. I will be reviewing the trilogy here, on CatMint5’s World, and I might throw in a few words about the short story as well. Basically, it’s the aftermath of three novels filled with interesting characters and a plot twist that had me going “How did he even plan this?!”, but in a good way, because it totally made sense.

Flame – the sequel to Frost (click on the title to read my review of that novel) – by Erin Latimer comes out on April 15th; what do you know? Just in time for my birthday! Giants with magical powers, politics, war and a love story – how can I say no to that?

Another book by a Wattpad author that I’m itching to go through is The Enchantment of Emma Fletcher by Leah Crichton. Look out for this one on March 13th. I know I will.