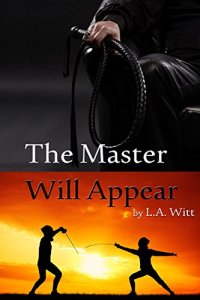 The Master Will Appear by L.A. Witt

Dr. Mikhail “Misha” Budnikov takes one look at fellow fencer Ryan O’Connor and instantly knows his type. The undisciplined hothead is all ego with no finesse and even less control. In short, Misha’s pet peeves personified. To put the arrogant kid in check, Misha challenges him to a sparring match, which he predictably wins.

Not so predictably, Ryan asks him to be a mentor and show him how to fence. Startled by the moment of humility, Misha agrees.

What begins as fencing lessons becomes something much hotter, and before they know it, Misha is giving Ryan an entirely different kind of education. Dominance, submission, pain, pleasure—at the hands of an older, experienced man, a whole new world is opening up for Ryan.

As the trust deepens and their bond strengthens, though, Ryan retreats because that sham called love left him jaded long ago. Cynical beyond his years, he’s not letting his guard down, least of all for a thrice-divorced man twice his age.

Now Misha has to find a way to crack through those defenses…or accept defeat and walk away from the submissive who might just be the love of his life.

I admit: I had my reservations when I picked The Master Will Appear ARC.

To my greatest relief (and pleasure), L.A. Witt was not one of those authors.

So, good sex scenes, but does the rest of the novel live up to them?

The answer is yes.

I very much enjoyed the whole novel, even the fencing lessons and I’m not interested in reading about fencing. There were no “I can’t wait for these scene to end so I can get back to the good stuff” moments; everything is the good stuff. There’s the occasional humor – not so much the situations, but the clever way the characters speak, the grounding moments where a character goes through something difficult, and the sweet “ooh, he’s there for him” moments. It’s a very realistic story and I can totally see it happening to real people, not characters.

However, I do have a complaint: repetitions.

Conclusions the characters reached about each other are sometimes repeated several times in a short span, as if to remind the reader. I probably wouldn’t have noticed this if I was reading one – or even two – chapters a week, but since I read every day for a few days, it made an impression on me.

That aside though and a couple of sentences that contradicted each other (this could be fixed in the final version of the book), I enjoyed myself while reading The Master Will Appear.

Would I re-read this book? Probably.

Am I interested in other books by this author? Yes.

Have you read The Master Will Appear?

2 thoughts on “What I Think about The Master Will Appear by L.A. Witt”