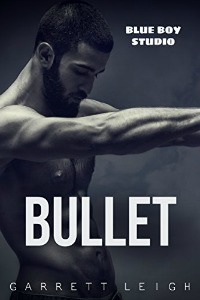 Seven years later, he’s a veteran with a reputation as one of Blue Boy Studio’s most ruthless tops, and when his boss suggests it’s time for a change, he finds himself staring down the barrel of a gun. Figuratively speaking, at least.

Enter Sonny Valentine, a go-go dancer at Blue’s sister club, Silver’s. Levi has secretly admired Sonny from afar for years, but there’s a problem. He can’t stand Sonny and the feeling is entirely mutual. When Levi learns Sonny is to play the third part in a scene he already considers his worst nightmare, he figures things can’t get any worse.

But when preparations for the scene from hell collide with tragic events in his personal life, he finds his fast-growing, red-hot attraction to Sonny just might be the only thing left between him and a bullet.

Ladies and gentlemen, and everything in between and beyond, I have a new addiction and it’s called Garrett Leigh.

Okay, obviously this is going to be a positive review, but what exactly did I like?

It’s been a few months since I’ve read a book that’s gotten me so hooked. From the blurb you can gather that we are not talking about some magical experience with complications and twists at every corner. But that works just fine in Bullet.

It’s one of those very realistic books, where you have no problem believing the story could take place in real life. The complications the characters have to deal with don’t seem forced and just another plot device to get the guys together. Everything happens very naturally and is very well-paced.

This brings me to one of the reasons why I gobbled this book up: there’s just something about Garrett Leigh’s writing style that speaks to me, that allures and engages me.

The other thing are the characters.

Not only are they written well as individuals, but I found myself thoroughly caught up in their chemistry. I don’t know what it is about this author and the way she writes couples, but she totally sells it. It’s not something I could explain even if I gave you spoilers (which you know I don’t do in my reviews); it’s just something you’ll have to experience for yourselves.

As for the sex scenes (and there are a lot of those): well, I’m happy to say there’s no rolling of eyes or snickering when you read them. They are hot, real, and make you want to spend the night over at your boyfriend/girlfriend’s place… Basically, how sex scene should be.

In short: Bullet is a well-written book, with interesting characters, engaging relationships, some spicy scenes, and something intangible that pulls you in.

Who would I recommend this book to? Everyone! It’s so well-written, with such interesting characters that unless you are against same sex couples or read only Sci-Fi/Fantasy/Paranormal and/or children’s books, then take a gander at what’s inside Bullet.

Would I re-read this book? Hell, yes!

Am I interested in other books by this author? Do you need to ask? I want all books in the Blue Boy Studios series and pretty much every other e-book by Garrett Leigh that I can find, with maybe the exception of those two or three that are about war/soldiers/ex-soldiers. I don’t enjoy books about modern-day war, but, as I said, I love the way this author writes so I might end up buying those as well.

Other books by this author that I’ve reviewed:

Have you read Bullet?

17 thoughts on “What I Think about Bullet by Garrett Leigh”