It’s the first Sunday of the month so it’s time to share with you what I’ll be reviewing. I’ve got three novels and to celebrate Pride Month, they are all about LGBT characters. In the chronological order the reviews will be up, we have…

Teague Martell has been License to Game’s bassist for over a decade, and he’s played Casanova for just as long, sleeping with almost everyone in his path. But unbeknownst to even his bandmates, it’s always felt like going through the motions.

His best friend and LtG drummer Christian Vogel has secrets of his own. Like that he’s had a crush on Teague for as long as he’s had crushes. And while LtG’s lead singer may have made his solo plans public and sent the band into a tailspin, Christian’s got a side gig as well—one he’s been keeping under wraps.

A nude photoshoot for a charity calendar has Teague seeing Christian in a different light—suddenly he knows what it is to want. But disagreements about the future of the band could impact their future as a couple. Christian and Teague have to decide whether their differences of opinion create a sweet harmony or if there’s too much discord in the duet they’re finally playing.

Date of my review: Monday, June 11

You, Me and Her (standalone) 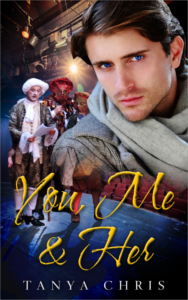 Nate wasn’t made to be monogamous, a fact he never fails to disclose to his partners. No matter how much he loves the women he’s with, he sees potential in others. Does that make him a horrible person? His on-again, off-again lover and current co-star, Deb, certainly thinks so.

But his other co-star, Joshua, understands. Joshua, who’s fast becoming the best friend Nate ever had, doesn’t even mind when Nate hooks up with his wife, Sherry. Well, he does mind a little, but only because he has the hots for Nate himself.

Meanwhile, the situation with Deb is growing ever more toxic, the future of their show is at stake, and not all of Nate’s friends are on board with the whole poly/bi thing. It’s a minefield Nate can only navigate with the help of one very special man.

Date of my review: Postponed

Add You, Me and Her to your Goodreads shelf (link takes you straight to the book)

After a drunken night of hot sex in Vegas, strangers Will Patterson and Dr. Patrick McCloud wake up married. A quickie divorce is the most obvious way out—unless you’re the heir of a staunchly Catholic mafia boss with a draconian position on the sanctity of marriage.

Stuck between a rock and a hard place, Will and Patrick don’t like it, or each other, but they have to make the best of it until they can find another way out of their marriage. To ensure the trust fund Will’s charitable foundation relies on isn’t revoked by his mobster grandfather, he and Patrick travel to Will’s hometown of Healing, South Dakota, posing as a newlywed couple in the throes of true love at first sight.

Complicating their scheme are Will’s unresolved feelings for his all-too-recent ex-boyfriend Ryan, and Patrick’s desire to get back to the only thing that really matters to him in life: neurosurgery. Will they fool everyone? Or will the mafia get wind that their marriage is a fake? Throw their simmering attraction into the mix and all bets are off!

Date of my review: Postponed for July

Have you read anything by these authors?

Did you enjoy it?