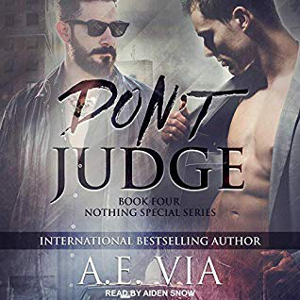 *Note: This book can be read/listened to as a standalone

Detective Austin Michaels didn’t think life could get any better after he was accepted into the most notorious narcotics task force on the East Coast, headed up by two of the baddest’ Lieutenants with the Atlanta Police Department – Cashel Godfrey and Leonidis Day.

Michaels knew he would fit right in as the team’s sniper, having received his fair share of commendations for marksmanship. He was just as badass as the rest of the twenty brothers that made up their team. But when Michaels lets their prime suspect get away from a huge bust with over a quarter of a million dollars in drugs, he’s willing to do whatever it takes to make it right.

Left with no other options, God chooses to bring in outside help, calling on his long-time friend and bounty hunter, Judge Josephson.

Judge was considered one of the best trackers during his enlistment in the United States Marine Corps. After retiring, he used those skills to become one of the most sought out fugitive trackers in the country. When Judge gets a call from his old friend needing his help, he quickly tells God, yes.

Still embarrassed, and intent to prove himself, Michaels immediately volunteers to partner up with Judge to get their suspect back quickly and quietly. Neither man wanted or needed a partner. But, after Judge and Michaels get on the road, the hate/lust relationship they quickly develop between them will either make them heroes… Or get them killed.

Don’t Judge is the fourth book in A.E. Via’s Nothing Special series and the third one I’m reviewing on my blog, after having shared my thoughts on books two and three (yes, I know: I should review the first one too).

By now, there are certain things I’ve come to expect from this author.

I expect there to be more material on the relationship between the leads than the action and I haven’t been let down with this one; I expect there to be funny banter between all of the characters, not just the main two, and I got this as well; I expect that every now and then during the sex scenes, there will be a word combo that makes me cringe and unfortunately, this book takes the lead when it comes to these.

There are also things that I expect from this narrator: an overall good performance with the occasional mix-up when it comes to the voices. There were indeed a few lines delivered with the wrong voice, but it wasn’t too off-putting. In fact, after listening to the series, Aiden Snow has become my favorite narrator and I’m considering checking out his other projects.

So, should you expect anything new when comparing Don’t Judge to the other books in the series?

When it comes to the story: yes; the focus shifts to a new couple, put in a new situation.

When it comes to the writing style and delivery: pretty much the same as with the previous books, which, if you are like me and enjoyed them, is actually comforting.

Who would I recommend this book to? I’d recommend Don’t Judge to A.E. Via’s already established fan base and to people who enjoy their romance with some action other than the one in bed… Although there’s plenty of that too.

My rating for the book:

My rating for the narration:

Would I listen to this book again? Probably.

Am I interested in other books by this author and narrator? Yes.

Want to win an audio copy of Don’t Judge? Enter the giveaway!

Other books by this author and narrator that I’ve already reviewed:

3 thoughts on “What I Think about Don’t Judge by A.E. Via (Audiobook Review & GIVEAWAY)”